For the first time at the Extreme Barcelona, ​​music will have a leading role beyond the cultural scene with the Flex Moments. During the breaks between sports competitions, renowned Barcelona’s rap and trap artists will jump into the Skateparks to offer a 15-minutes showcases.

Throughout the weekend, a line up full of local emerging artists will have the opportunity to show their talent in the most powerful spaces of the event, the Skateparks: Central Park and Street Plaza. In the previous moments to the finals of sports competitions, Rap, Trap and Hip Hop will become the new protagonists of an event that will integrate music and sport on the same stage as one of the great novelties of this 11th edition.

In total, there will be eight showcases during the two days of the event open to the public, four on Saturday, September 25th at the Street Plaza and four more on Sunday, September 26th in Central Park. 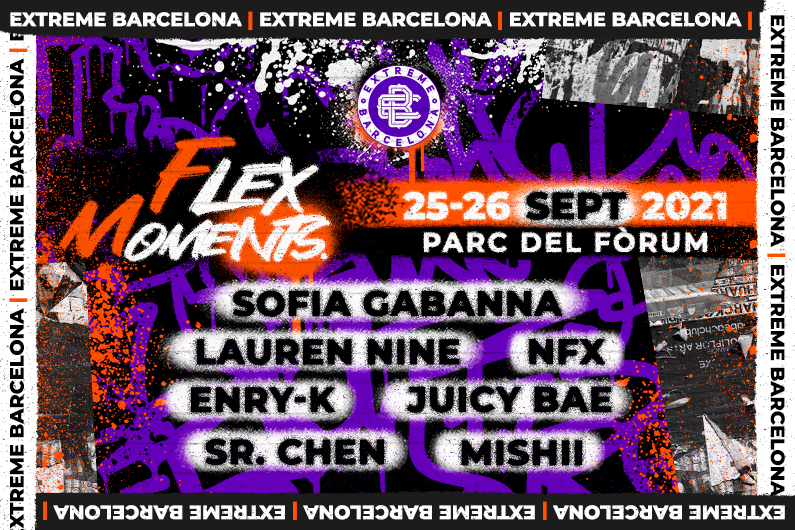 Lauren Nine, Mr. Chen or Nfx, among the artists of the Flex Moments

Lauren Nine, a local iconic singer-songwriter and music producer, will be one of those in charge of making the audience of Extreme vibrate with her music characterized by the direct influence of the purest Hip-Hop. One of the other recognized names is Sr. Chen, considered by many a reference within the world of Hip-Hop in Spain. The talented singer and producer will deliver the most groundbreaking melodies, rhythms and lyrics of the entire scene.

Under the influence of the purest and old-school rhythms of Hip-Hop, the Chilean NFX arrives, one of the great voices of the new Hip-Hop and an innovator in the scene incorporating new sounds and lyrics. Representing women, the energetic style of the Argentine Sofía Gabanna will bring a breath of fresh air reminiscent of the purest Hip-Hop. She is undoubtedly one of the most influential young singers on the urban scene. Alongside Gabanna, standing out for its vibrant and explosive sound, Juicy Bae will teleport you to another dimension where her voice, along with the rhythm, keep the hype in the environment.

Finally, two members of the exciting Catalan trap group will have a major role at the Extreme taking urban music to another level. Enry-K, one of Damed Squad’s main leaders and one of the most acclaimed singers and producers of the moment, will blow everyone away with his solo album “Luz Rosa”, while the Barcelona-born Mishii will be in charge of bringing a great diversity of musical styles. From the purest Hip-Hop to Rock Punk, the audience will be able to enjoy a good dose of flow, energy and explosiveness in each of his songs.

If you are a fan of sports and urban culture, don’t miss the Extreme’s offer,  from​​ September 25th to 26th at Parc del Fòrum. You can enjoy the best international competitions with the participation of Olympic medalists, as well as a varied offer betting on urban culture with more music, art and lifestyle. Advance tickets already available here!