Check all the imaginExtreme Barcelona schedules!

Check all the imaginExtreme Barcelona schedules!

Everything is ready in the Parc del Fòrum. The parks are finished and the riders are already in town. Everyone is impatient for the tenth edition of imaginExtreme Barcelona to begin. The only piece missing is you, the public, that you have to connect on November 6 and 8 to the Urban World Series YouTube channel to see the best tricks of the best European and international riders.

The high probability of rain for Saturday has forced the organization to make the difficult decision to postpone the competitions scheduled for Saturday, November 7 to Sunday, November 8 which can also be followed by streaming on the different channels.

After an intense work, we announce that we already have the schedules available for the tenth edition of imaginExtreme Barcelona! An atypical edition but at the same time very special for everyone, since it is the tenth. Despite having the stands empty, we will notice you very close in the streaming.

The competition will be divided into two days, in which the best skateboarders, BMX, scooter and roller freestyle riders will meet at the Parc del Fòrum. This year, as we cannot have an audience, the television coverage will be exceptional, and that is why we want to remind you where you can follow the event in streaming.

First of all, in the Catalan sphere, the sports channel of TV3, Esport 3, will offer unprecedented coverage so that you do not miss a single detail of the event. If you want to follow the event through an online platform, you can follow the most outstanding finals on the Urban World Series YouTube channel. This year, Olympic Channel will also offer the live feed of the event, as will IMG’s sports channel, Edge Sport.

It is time to reveal the final schedules. On the first day of the event, Friday, November 6, the finals of the Spanish scooter championship will take place in the morning. In the afternoon it will be the turn of the skate street finals, moved to this day due to the rain forecast for Saturday. The women’s final will be played from 6:00 p.m. to 6:45 p.m. and the men’s from 7:15 p.m. to 8:00 p.m. 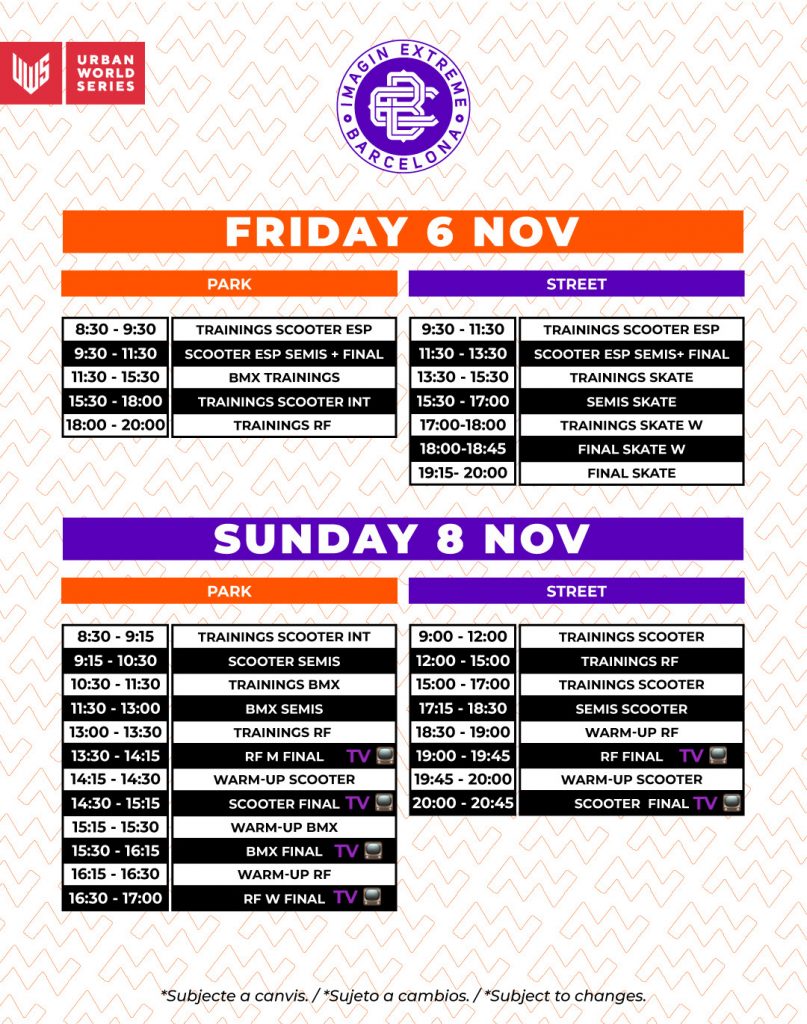