Nerf is getting into urban sports with Extreme Barcelona, as official sponsor of the event and where it will also set up a space dedicated to “Nerf Challenges” combining urban sports, agility, aim, precision and a lot of adrenaline.

More than 200m2 dedicated to 3 activities inspired by the urban sports of parkour, scooter and pump truck connected with 3 categories of Nerf products aimed at highlighting their main characteristics: agility, speed and precision.

Visitors will be able to participate in the three areas of the Nerf Challenge in the Parc del Fòrum and if they are the fastest, most accurate and with the highest score, they will be able to take home a pack of Nerf products and a pack of Safta backpacks.

The three tests are as follows: 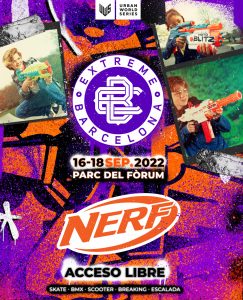 The challenge will consist of three circuits, where participants will experience the Nerf Elite 2.0 Motoblitz launchers, a blaster that will make you experience extreme distance, precision and speed in each launch. This blaster launches with power in Airblitz mode, launching up to 6 darts at a time or by motorised burst launch.

Participants will test their aim with the new Nerf Ultra Strike, which stands out for its great power as the main feature of the Ultra range and its incredible precision thanks to its extra-long barrel and its motor that manages to throw 10 darts in a row in a burst.

The Nerf DinoSquad Armostrike will be another of the protagonists that will test all the skills of the little ones and not so little ones, with its spectacular design based on a replica of the feared Anklyosaurus, this blaster launches up to 8 darts in a row from its rotating drum, facilitating reloading so that you don’t run out of darts and thus becoming the fastest at each launch.

All participants will be able to customise the Elite 2.0 Commander RD-6 launcher which features 3 tactical rails, barrel attachment point and butt attachment point. This launcher has a rotating barrel to launch one dart at a time or 6 quickly with the burst action and reaches a distance of 27m.

And to top it all off, on the 18th of September at Extreme Barcelona within the Nerf activities enclosure, the “Nerf Ultimate Challenge’ will take place where Sieteex and Karchez, two of the most relevant Influencers of the moment will measure their skills with the Nerf launchers combining different urban sports in an unforgettable experience that will be broadcast live on Karchez’s Twitch channel. Accompanied and guided by another great influencer Suja GG who in this case will be the star presenter. This real duel will be broadcast live.

The Parc del Fòrum is already getting ready for some frenetic days, where all attendees from all over the world will be able to enjoy three days of urban sport, music and different activities offered by this 12th edition of Extreme Barcelona.