2021 has set a point of inflection in skateboarding after its debut as an official sport in the Tokyo Olympics and Extreme Barcelona continues to bet on skateboarding as one of the main sports in our event. Since 2008 has pushed for the development of skateboarding in the city of Barcelona.

The September 25th and 26th, some of the biggest names in international skateboarding will join a Street Plaza specially built for the competition in order to fight for the medals and for the great prize pool set for this 2021 edition.

2021 will maintain three skateboarding divisions inside the Extreme Barcelona. As every year male and female disciplines will be the main action focus and alongside the junior competition this year arriving under the name of Hot Wheels Superchargers will offer an endless number of pure Skateboarding hours and excitement inside Parc del Fòrum.

Some well-known names have already confirmed their attendance at Extreme Barcelona One of the regulars, who will not miss this year’s event in Barcelona is the madrilian skateboarder Danny León, one of the flagships of the Spanish scene who recently represented Spain in the debut of Olympic skateboarding at Tokyo. Danny is coming for the gold after achieving the silver in the Extreme Barcelona 2020, an edition influenced by the Covid-19 restrictions (we still remember that transfer kickflip stalefish in the final…).

Other great skaters like Matias dell Olio, Ivan Monteiro or Richard Tury will be Danny’s big rivals in the fight for the medals.as regarding the women’s competition the champion of 2020 edition and French Olympic skater Charlotte Hym comes to Barcelona committed for the gold medal. Her rounds last year were by far the most solid and she took a comfortable victory under the Par del Fòrum spotlights.

Skaters like Barcelonese Mar Barrera, who suffered a luxation in the last edition’s training, Argentinian Camila Ruiz or Russian Dominika Kralikova will be in charge of putting things hard for the French champion. 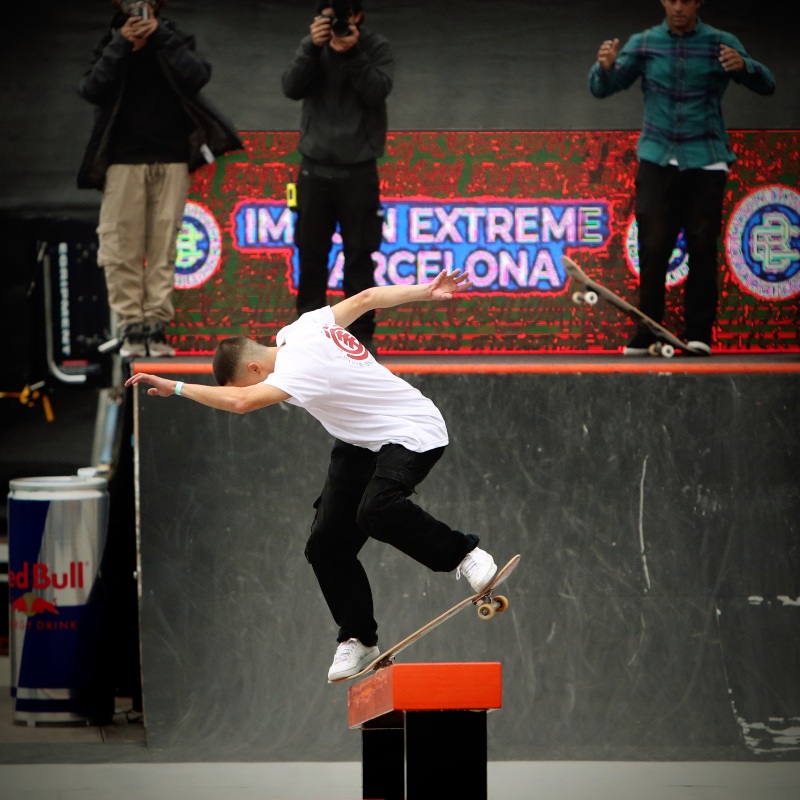 A unique and thrilling format

The format for this year’s competition will be the same as the one used in the last two years of skateboarding at Extreme Barcelona.

The qualifiers will consist on two 45s rounds and the best of two will be the one to score for a spot in the final.

The final will consist in two phases, a fist phase with two 45s rounds and a second phase with 3 single tricks.

Three overall best scrores will count for the final result.