The imaginExtreme Barcelona, ​​without public but with an international audience

The imaginExtreme Barcelona, ​​without public but with an international audience

This weekend is the 10th edition of imaginExtreme Barcelona, ​​one of the international urban sports festivals of reference in all of Europe and which has a wide worldwide impact. This year, due to the pandemic situation, the event must be held behind closed doors, but the organization has worked to maintain as much as possible the essence of this festival, which was held for the first time in 2008.

Without public but with a large worldwide audience

Despite the fact that imaginExtreme Barcelona is held behind closed doors, it will have a large number of people enjoying the finals of this 10th edition. The event has been offering some of the competitions in streaming for years, but this year, it further strengthens the distribution of the television signal.

In our country, the sports channel of Televisió de Catalunya (TV3), Esport3, will be the one who will offer the great finals live. In addition, throughout this week it will re-broadcast some of the most outstanding finals of past editions.

At an international level, imaginExtreme Barcelona can be followed through the Urban World Series YouTube channel. In addition, the Olympic Channel digital platform has been interested in the event, since it has some athletes who could make their Olympic debut in Tokyo next summer, such as the skaters Danny León, Matias Dell Olio, Gustavo Ribeiro or the BMX riders Daniel Dhers, Alessandro Barbero, Anthony Jeanjean among others.

In the traditional television field, the IMG distributor will echo imaginExtreme Barcelona through its EDGE Sport channel to more than 50 countries with a reach capacity of more than 900,000,000 homes.

The imaginExtreme Barcelona has been present in Barcelona for 12 years. Throughout all this time he has collaborated in turning the city of Barcelona into a benchmark in the world of urban sports. That is why Jordi Roquer, director of SevenMila, wanted to thank again for the support of the city: “these editions have been possible thanks to the Barcelona City Council, since they were the promoters. Barcelona is a reference city of the wheel small, in fact it’s the most skating city in the world along with Los Angeles.”

Roquer also wanted to thank the support of the Generalitat, which for two years has been supporting the event and the various sponsors, such as imagin, the entity linked to La Caixa that has made imaginExtreme Barcelona grow. “The event has grown thanks to imagin and imaginExtreme Barcelona has made imagin grow, which is now a platform for young people“. Jordi Roquer also wanted to mention the new link with SEAT MÓ, Seat’s urban mobility brand and analyze the growth of the event and audiovisual production from TV3 and Esport3, which he described as “major producers of urban sports“.

Barcelona as the capital of urban sports

“Today is again a special day for everyone, if twelve years ago they told us that we would be here today, no one could think about it.” This is how David Escudé, the Barcelona City Council sports councilor, began his words to thank again for a new edition of imaginExtreme Barcelona.

The city’s commitment to urban sports has grown spectacularly in recent years, and proof of this was the World Roller Games (WRG) that Barcelona hosted last year. “The WRGs were a wonderful event, which put us in the center of the world. If we had them it was thanks to the 9 years of imaginExtreme Barcelona.” The synergy of imaginExtreme with the city is unique and this year, despite being “different“, the city has not wanted to remain “stopped” in this bet. 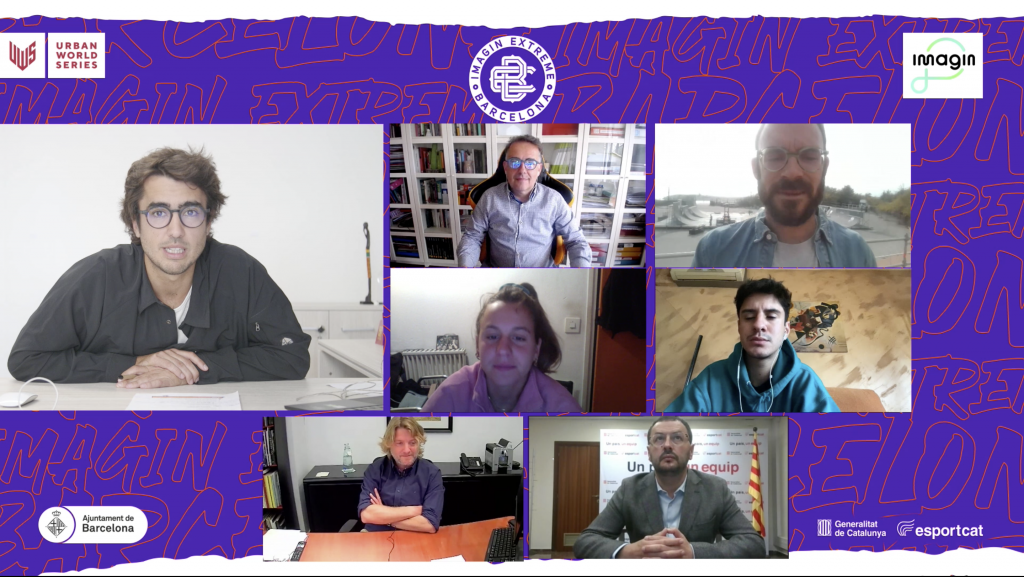 The presentation press conference has been held online

This year, the Secretaria General de l’Esport also supports the project, which always seeks to be inclusive, to be a leg of social support and, in addition, to be an event that allows young Catalan athletes to take a step forward in their sports careers. On Friday 6th, it was planned that tests corresponding to the Catalan championship could be held, but due to the new restrictions they will not be able to be carried out. However, some of the young Catalan scooter promises will be able to participate in the Spanish championship, which will take place on Friday.

In addition, the director of the Consell Català de l’Esport, Antoni Reig, pointed out that “the Generalitat is proud to host a show like this. All the editions of imaginExtreme Barcelona and the World Roller Games last year have located in Barcelona and Catalunya as the world capital of small wheel sports.”

The current world situation does not allow the event to have great stars from around the world as usual. Travel restrictions, confinements and, especially, the desire not to spread the virus, have made the event’s sporting management select the best riders at the national level, from Europe and those athletes from other continents but who live in Europe.

The 10th edition of imaginExtreme Barcelona will be a more compact version at a sporting level, since the number of sports modalities as well as categories have been reduced with the aim of maintaining the spirit of the event but trying to be prevented. “This year is a litmus test for everyone, to show that it is a strong event and that they want to continue,” says Quim Garcia, sports director of imaginExtreme Barcelona.

At the level of athletes, Quim Garcia has wanted to highlight some riders such as “Daniel Dhers, who will be sure in the Olympic Games representing Venezuela. As for the scooter we will have two world champions, who are European and have come. Apart from Dhers, also we will have athletes who will be in the Olympics like Gustavo Ribeiro, who is one of the 10 best in the world in skateboarding. In summary, we have made a selection of the best athletes to have a high-level competition.” 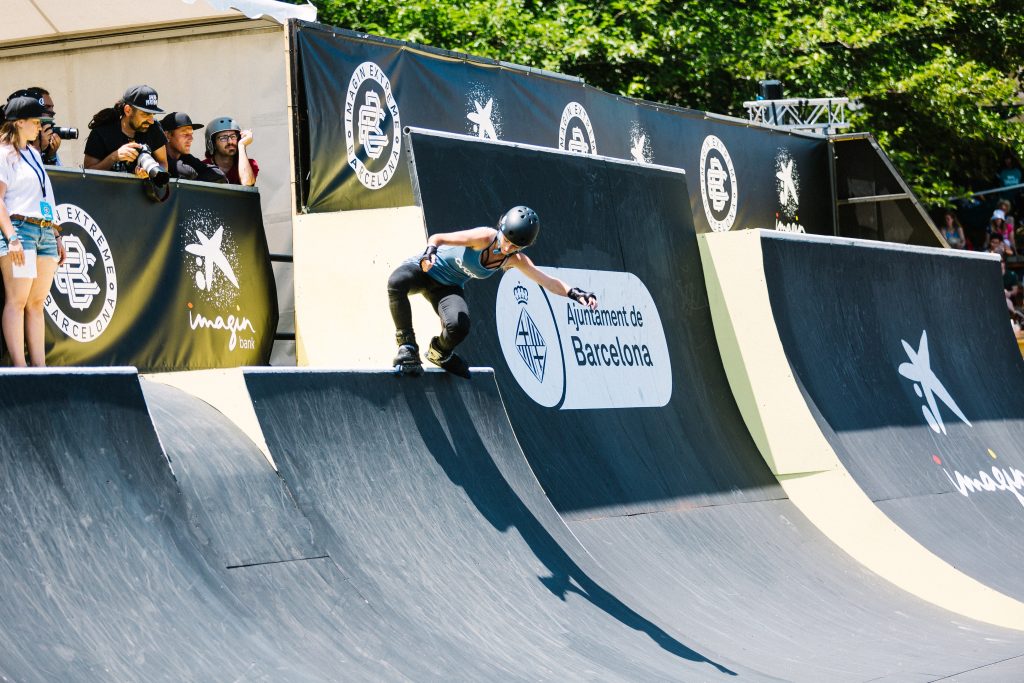 Photo from the last edition final (2018)

Despite having a large international line-up, the imaginExtreme Barcelona also wants to be a speaker for the best local riders, and proof of this is the participation of athletes such as Mar Barrera, winner of the World Roller Games for skateboarding and Erik Ávila, rider scooter. Both have been part of the presentation of the event and have shown their desire to start the competition. “I was very happy to find out that the imaginExtreme Barcelona was doing again, but at the same time sad to know that it would be without an audience, since being in Barcelona it is very special for me that my family and friends come to see me” she pointed out Mar Barrera.

Erik Ávila explained that “I feel good, I like to compete and I am really looking forward to it. The skatepark looks amazing and what I want is to enjoy and make the public enjoy, which in the end is what all riders want.” Athletes have also been asked about the rise of Urban Sports, and the two have concluded that the growth is “evident” since “there are more and more skaters and more girls, a brutal social media community is being created and between they see that the fans are growing” pointed out Mar Barrera. Erik Ávila also wanted to add that, in addition to skateboarding, other sports such as scooters “are getting higher and higher and the possibility of doing tricks with a scooter is becoming more and more visible by the boys and girls of the city.”

In order to follow the new prevention measures for Covid-19, the imaginExtreme Barcelona has made its presentation in a virtual session. The Hon. Mr. David Escudé, Councilor for Sports of the Barcelona City Council; Mr. Antoni Reig, Director of the Catalan Sports Council; Mr. Jordi Roquer, SevenMila Events director, organizing company of imaginExtreme Barcelona; Mr. Quim Garcia, sports director of the event; and the athletes Mar Barrera (skate) and Erik Ávila (scooter).

In addition, the event has a strict protocol that will be applied throughout the weekend and that, apart from the basic measures of the mandatory use of a mask, social distance and constant cleaning of hands, also includes bubble groups among athletes, limitation of organizational personnel or the constant disinfection of the premises.